Deadlock Example and How to detect it using JConsole

Let’s assume that Amy and Adam want to make breakfast, and both of them require a pan and oil (shared resource) for frying the raw ingredients that they own.

This is a deadlock situation where Amy and Adam have acquired a shared resource each and won’t let go of it until they get the other shared resource. Hence, Adam and Amy are stuck in a situation that can never be resolved. 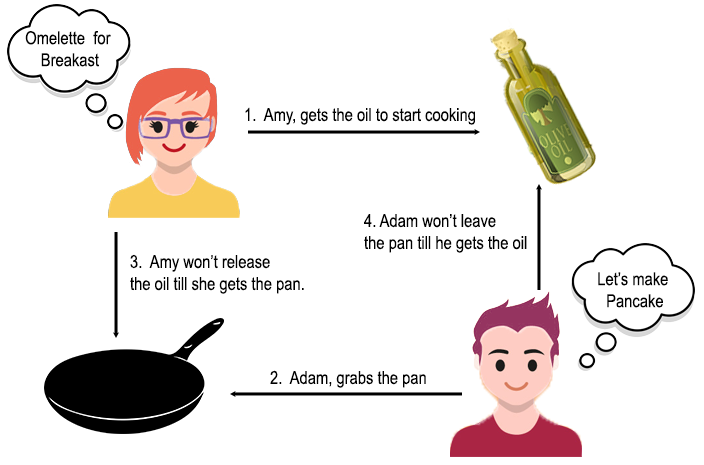 The deadlock example in Java is quite similar to the example we discussed above. Instead of Amy and Adam, we have Thread 1 and Thread 2 and instead of Pan and Oil, we have Object 1 and Object 2.

In the diagram below we can see the sequence of actions that will lead to a deadlock between two threads. 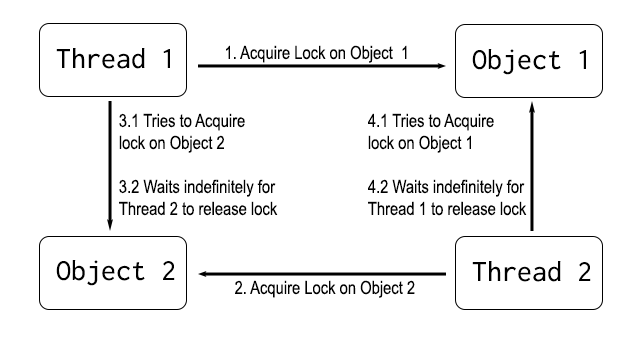 These sequences of actions will lead to a deadlock between Thread 1 and Thread 2 for the same reasons as we discussed above in the real-life deadlock example. The example Java code for creating this scenario is posted on Github.

What is Stack trace and how to read it?

To successfully detect a deadlock condition, it’s important to understand what the stack trace is and how to read an analyze it. The stack trace is the call stack i.e the list of methods that were called in order till the point of the current execution of the program.

The methods are called in the following order.

How to print stack trace in Java

To print the stack trace of all the threads in your Java application using the command-line interface you can follow these steps.

Note: To use the jps and jstack tool you need to have the Path Environment variable set to the bin folder of your JDK installation directory.

JConsole can easily detect trivial deadlocks, like the one we discussed above with just a button click. The steps to detect deadlock using JConsole are as follows.

In large applications with multiple threads, detecting deadlock can be a difficult task. To detect non-trivial deadlocks we need to analyze the stack trace of all threads and try to find interdependencies between all the threads.

Let’s try to manually find a deadlock using the stack trace of the Java application discussed above.

From the stack trace of thread-0, we can analyze the following

From the stack trace of thread-1, we can analyze the following