In this post, we will see example code of memory leak in Java. Afterward, we will connect the Java application to JConsole to compare the memory usage of the application with and without memory leaks. The deep dive into the memory monitoring tool of JConsole will allow us to see how the Heap memory is divided into different spaces and how the Garbage collector efficiently manages the memory of the Java Application.

In Java, the Garbage Collector (GC) is responsible for freeing up the memory utilized by unused objects. Any object that doesn’t have a reference to it is eligible for Garbage collection as seen in the image below. The Reference to a Dog object – Buddy is set to null in the second part of the image hence it becomes eligible for GC.

What is a Memory Leak in Java

A memory leak is caused when the program fails to release unused memory which can lead to either unexpected results or application crash. Even though there is no official definition of a memory leak in Java we can broadly divide it into two categories for ease of understanding.

The first kind of memory leak occurs when the reference to the object is no longer present in the running code but the Garbage Collector is still not able to free up space for these objects. An example code of this is posted here.

The second kind of memory leak is mostly due to faulty logic in the program where the reference to unused objects is kept in the running code (even though the object will never be used again) which doesn’t allow the GC to reclaim the memory. Some developer considers this leak as, not an “actual memory leak” because setting the reference to null would allow GC to reclaim the memory. However, if the code is already deployed there is no way to set the reference of unused objects to null. In the following section, we will consider the example of this kind of leak.

Example of Memory Leak in a Java Program

Let’s consider a real-life example of a Dog Shelter where Dogs are added to the shelter and removed from the shelter when they are adopted. The complete example is hosted on Github.

The Dog.java class has three variables described below.

Below is the problematic piece of code which can lead to a memory leak. In the overridden equals method we are comparing two Dog objects by equating the microchip ID and the dog name. Since the name of the dog can change, using it to equate two Dog objects can lead to unexpected results. For instance, deleting the Dog object stored in a HashSet would fail if the Dog object is stored with the old name and we try to remove it using the new name.

The DogShelter.java class is responsible for maintaining the list of Dogs currently present in the shelter in a HashSet as seen below.

The class exposes two public methods that can be used to Add and Remove Dogs in the shelter.

Finally, to trigger the memory leak we will serially add and remove Dog objects in the HashSet.

Let’s run the main method and see how our program crashes with OutOfMemoryError in a matter of seconds.

How to monitor the memory usage of Java Application using JConsole

After running the main method open JConsole and connect it to the local Java Process. If you are unfamiliar with the steps you can follow this tutorial.

After connecting JConsole to your local Java Process, if you click on the Memory tab you will see the Window as seen below. Let’s discuss each feature of the Memory Tool in depth. 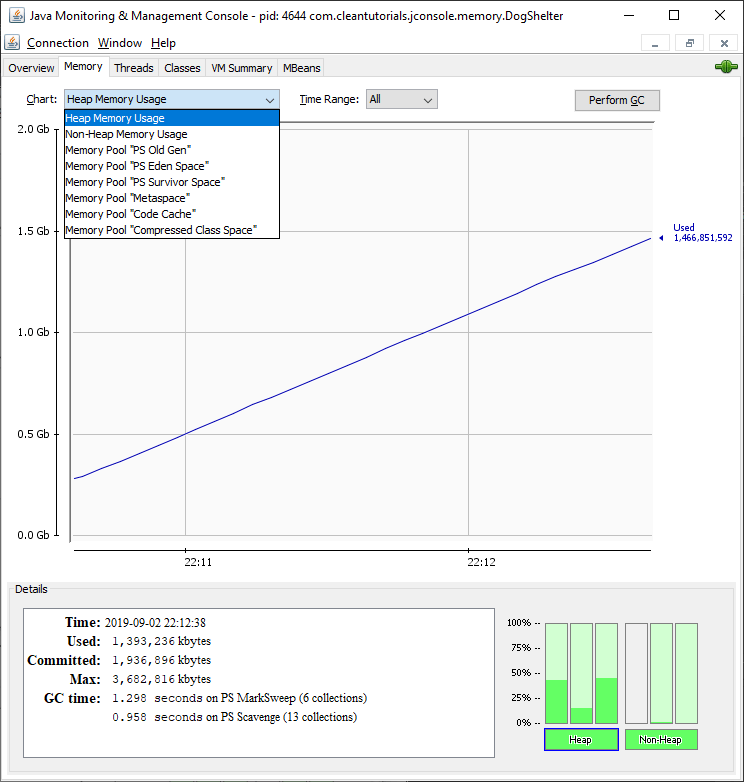 In the lower right corner of the JConsole window, we can see several bars representing the current memory usage percentage. The memory space is divided into Heap space and Non-Heap Space.

The objects that you create using the new keyword land up in the Heap space. In a typical Java Program, since new objects are continuously created and deleted we need a mechanism to recover the memory of the unused objects. The Garbage Collector is responsible for actually freeing up the memory of these unused objects and to do this process efficiently the heap memory is divided into 3 different spaces.

The GC runs less frequently for the old Gen space as the long-living objects live in the space. Whereas the GC is run more frequently on the Eden space as new objects are more likely to be dereferenced. This segregation of heap memory allows for efficient memory management.

The Non-Heap space is divided into the Metaspace, Code Cache and Compressed Class Space.

Metaspace stores the metadata describing user classes. So all the class related data like the Static method and primitive type variables are stored here. Prior to Java 8, PermGen was used instead of Metaspace. The Metaspace has the following advantages over PermGen

Code Cache space is used to store the native machine code for faster execution of Java Program by the Just-In-Time (JIT) Compiler. 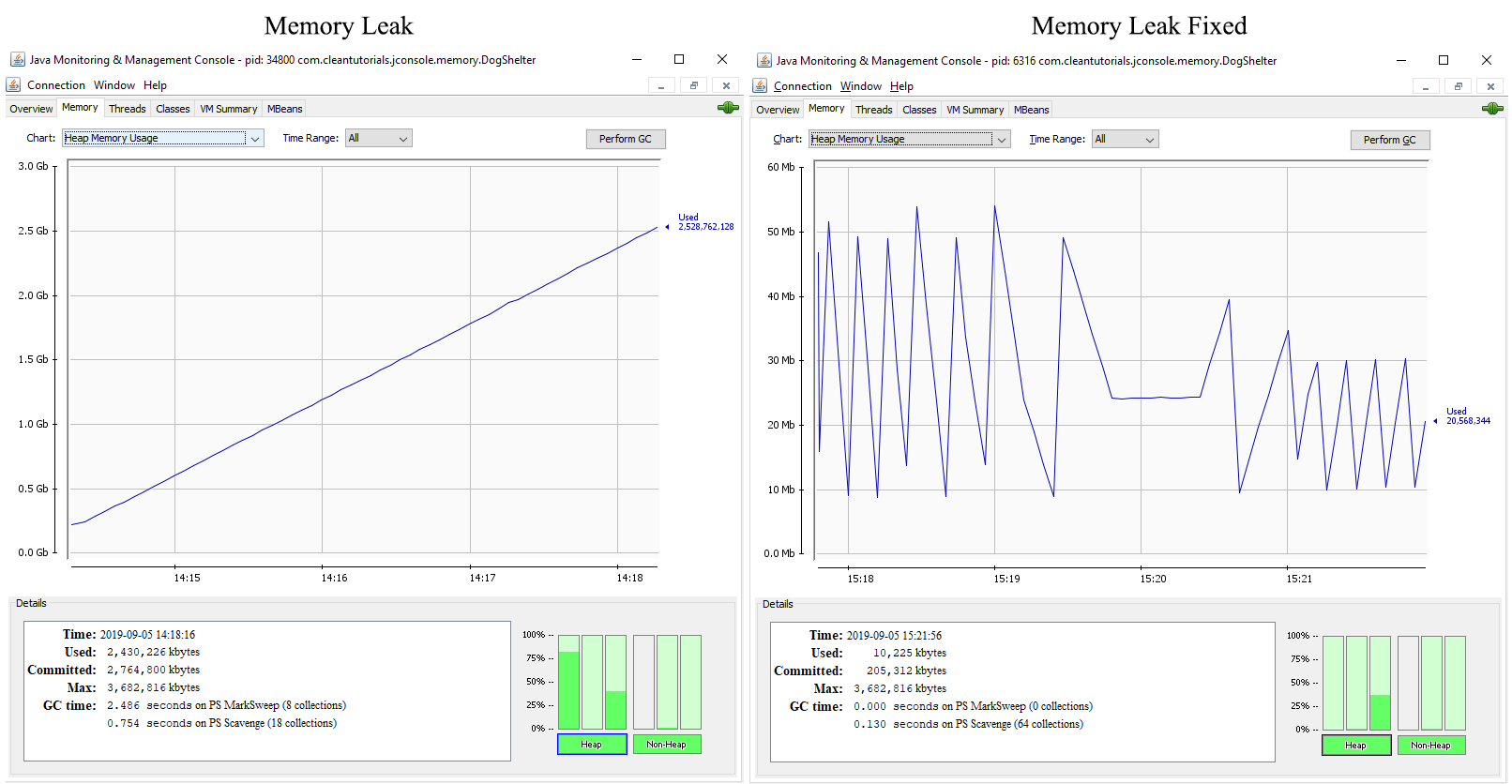 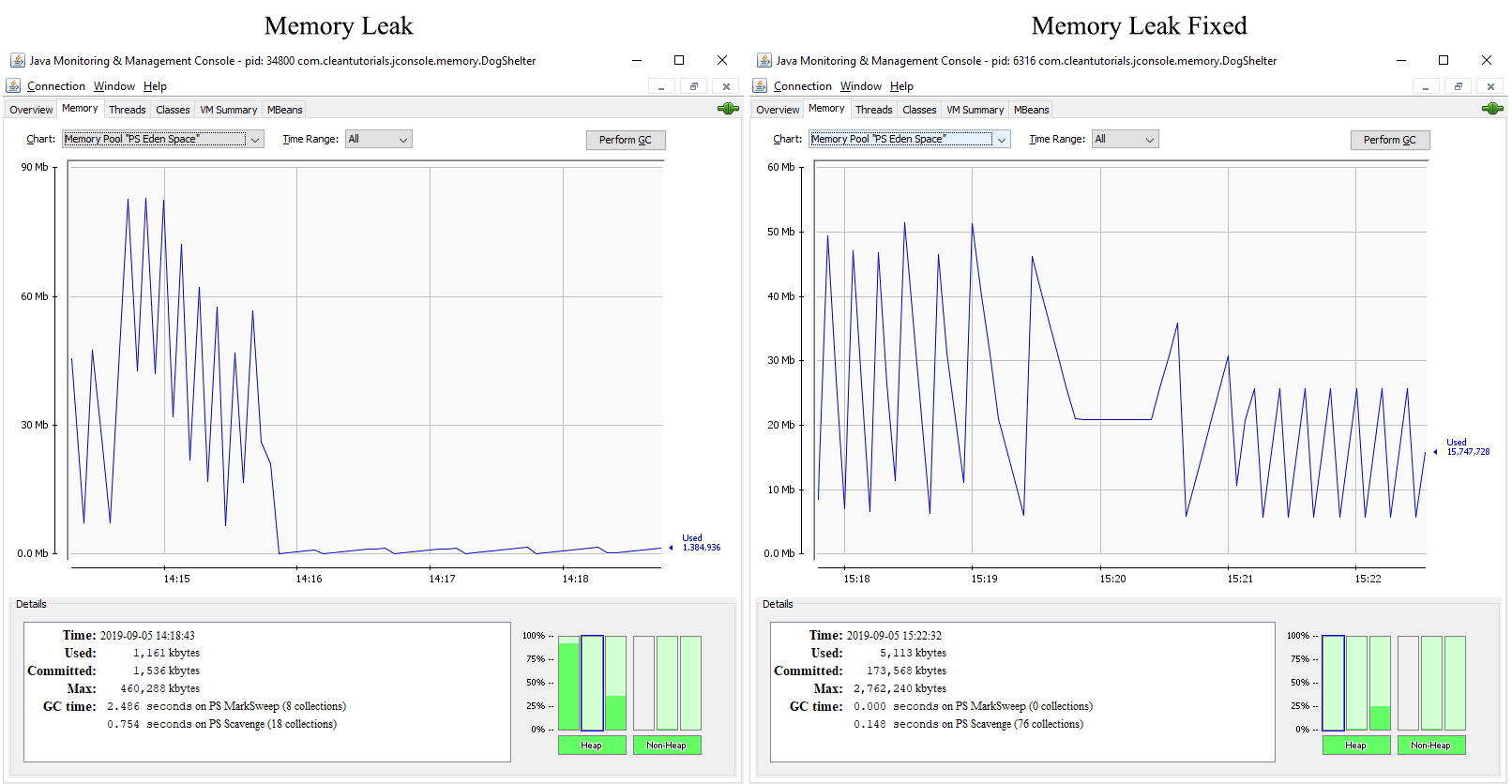 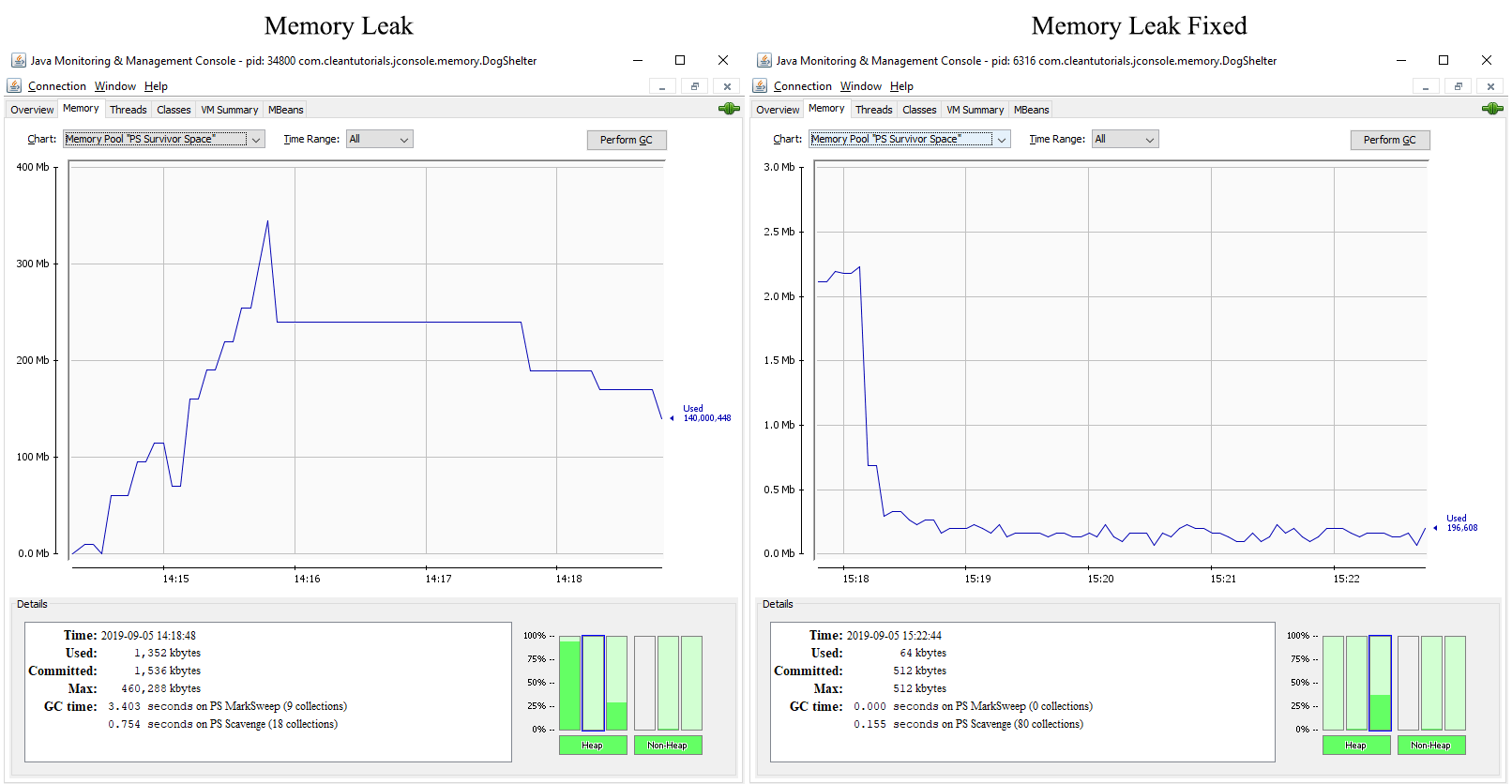 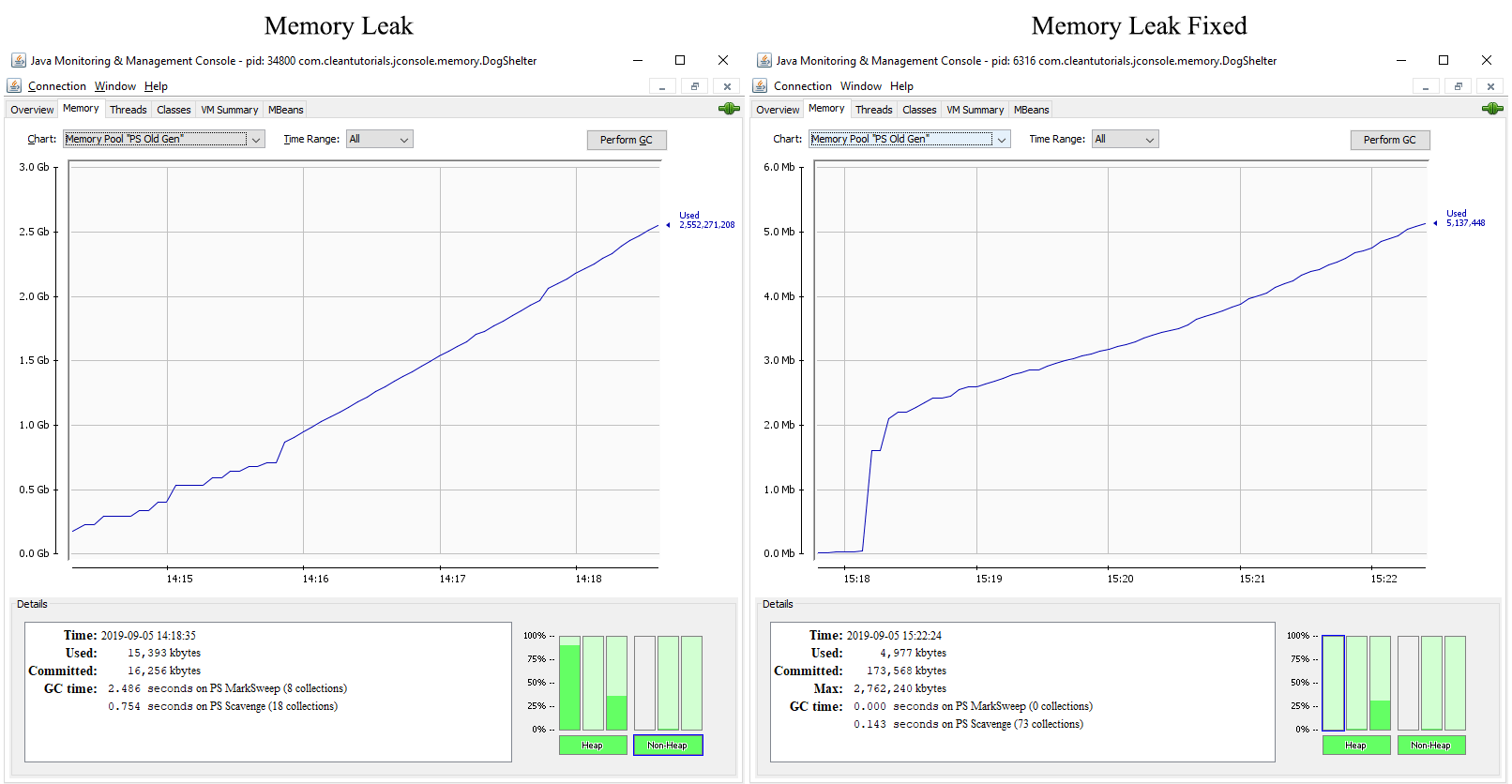 In the next post, we will see a dirty hack to detect any major memory leaks in your Java application.